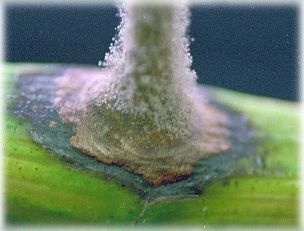 This fungicide use strategy is designed to manage the problem of resistance to benzimidazole (also known as MBC) fungicides in New Zealand. It has been developed from previously published information (Tate et al. 1996) in consultation with the New Zealand agricultural chemical industry (Agcarm Inc.). It incorporates recommendations from the Fungicide Resistance Action Committee (FRAC) in Europe.

Benzimidazole fungicides include benomyl, carbendazim, fuberidazole, thiabendazole, thiophanate and thiophanate-methyl. They all generate MBC (methyl benzimidazol carbamate), either as the principal active ingredient, or as a breakdown compound formed on mixing with water. They have a common mode of action, interfering with cell division and hyphal growth of sensitive fungi. They are upwardly systemic with a broad range of activity against ascomycetes, fungi imperfecti and basidiomycetes (Table 1).

Benzimidazole fungicides were first introduced into New Zealand in the late 1960s and they offered systemic, curative fungicidal activity on a number of problem diseases. Those currently available are shown in Table 2.

1Diseases for which resistant strains have been identified in New Zealand.

Avoid benzimidazole use where resistant strains of the pathogen are known or are likely to occur. If resistance frequency is nil or low, use a maximum of two applications per crop per 12 month period (see Table 3 for exceptions), including crops where benzimidazoles may be indicated for the control of two or more pathogens, e.g. Sclerotinia spp. and Botrytis spp. in vegetables. Confine use to periods when disease risk is high, but disease level is low. Where practical apply in a mixture with a protectant fungicide. Comply with the label application rates at all times. Practise good crop hygiene and cultural controls. Using dicarboximides and benzimidazoles in the same spray programme may lead to development of pathogen strains with dual resistance and should be avoided.

Product labels should include a statement about resistance risk and a recommendation about the maximum numbers of benzimidazole fungicides that should be applied.

This resistance management strategy has been compiled with assistance from Jack Richardson (Agcarm Inc.) and Matthew Cromey (Crop & Food Research).