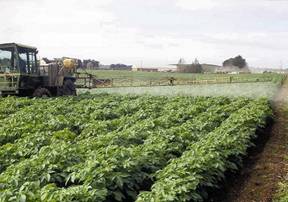 CAA fungicides are used against late blight in
potatoes and although the resistance risk is
considered to be low to medium, a
resistance prevention strategy is required.

to carboxylic acid amide (CAA) fungicides, which are currently represented in New Zealand by the three active ingredients, dimethomorph, iprovalicarb and mandipropamid. The CAA group was proposed in 2007 by the Fungicide Resistance Action Committee (FRAC) in Europe under their code No. 40 and includes compounds from the three different chemical groups, cinnamic acid amides (dimethomorph), valinamide carbamates (iprovalicarb) and mandelic acid amides (mandipropamid).

This strategy incorporates the strategy for dimethomorph which was previously listed separately in New Zealand (Beresford 2005, Beresford et al 1996). These guidelines have been developed in consultation with the New Zealand Association for Animal Health and Crop Protection (AGCARM) and are based on recommendations from FRAC.

CAA fungicides exhibit translaminar movement and although their mode of action is not clear, it is proposed that they inhibit phospholipid biosynthesis and interfere with cell wall deposition. They are considered to have low to medium risk of resistance development and resistance management is required.

Dimethomorph, which causes cell wall lysis in oomycete fungi (Albert et al. 1988), has shown no cross-resistance to phenylamide fungicides (Jensen amp; Lundsgaard 1999). Mutants of Phytophthora capsici moderately resistant to dimethomorph were induced in the laboratory with chemical mutagenesis, but not through adaptation (Young et al. 2001). A small proportion of field isolates of P. infestans were found to be tolerant to dimethomorph in Russia, however resistant strains that were induced through repeated treatment of potato plots appeared to have reduced fitness (Dereviagina et al. 1999). Attempts to detect resistant strains in field populations of P. viticola in Germany were unsuccessful, as were attempts to induce resistant strains artifically (Bissbort & Schlosser 1991).

The FRAC website has reported that sensitivity monitoring studies over several years revealed that in the populations of the late blight pathogen, Phytophthora infestans, all isolates were fully sensitive to CAA fungicides (Cohen et al. 2007). However, in the populations of the grape downy mildew pathogen, Plasmopara viticola, isolates can be found in certain regions which are simultaneously resistant to all CAA fungicides. Therefore, in the case of Plasmopara viticola, a positive cross resistance among all CAA fungicides is obvious for the vast majority of isolates. The degree of sensitivity cover a wide range of EC50 values with isolates being sensitive, moderately resistant and fully resistant. Inheritance studies have shown that sexual crosses between sensitive and CAA resistant isolates of P. viticola lead to a co-segregation of resistance to dimethomorph, iprovalicarb and mandipropamid, but not to the phenylamide mefenoxam which was tested in parallel as an independent marker. Further, the inheritance studies showed that the gene(s) for resistance to CAA fungicides are inherited in a recessive manner. Therefore, the entire F1 generation of crosses between sensitive and CAA resistant isolates was sensitive, and only in the F2 progeny did CAA resistance reappear in a few isolates. These results suggest that the resistance risk can be classified as moderate (as compared to high for phenylamide and Qol fungicides) and that it can be managed by appropriate use strategies as proposed in this strategy.

Observe manufacturer's recommendations for application rate and timing. Exceeding the maximum number of applications per season could increase the risk of resistance development. Apply preventatively when disease levels are low, but disease risk is high. Weather-based disease forecasting criteria are available to help effective timing of fungicides for onion downy mildew and potato late blight.

Apply a maximum of four applications per season. Apply CAA fungicides always in mixture with an effective fungicide that has an alternative mode of action.

Follow the manufacturers label directions. It is suggested that no more than 50% of the fungicide applications used against late blight or downy mildew should contain a CAA fungicide.

Product labels should include a statement about resistance risk and a recommendation about the maximum numbers of carboxylic acid amide containing fungicides that should be applied.