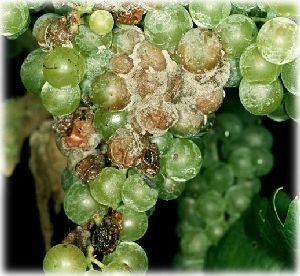 Dicarboximide fungicide use for control of botrytis
bunch rot Botrytis cinerea of grapes should be
limited to two applications per season.

These guidelines are designed to manage resistance to dicarboximide fungicides in New Zealand. They have been developed from previously published information (Beresford et al. 1996) in consultation with the New Zealand agricultural chemical industry (AGCARM). It incorporates recommendations from the Fungicide Resistance Action Committee (FRAC) in Europe.

Dicarboximide fungicides are active against a limited range of fungi (Table 1). The exact spectrum of activity varies slightly for different active ingredients within this group. Dicarboximides that are currently used in New Zealand are procymidone and iprodione (Table 2). Dicarboximides were introduced in the late 1970s, principally for the control of Botrytis cinerea in grapes. They were used as an alternative to the benzimidazole fungicides, to which resistance had developed in B. cinerea. Dicarboximides were used intensively in European vineyards and resistance in B. cinerea was found within about three years.

The mode of action of dicarboximides has not been fully characterised, but they affect fungal osmotic regulation, as well as resulting in some other nonspecific toxic effects. Dicarboximides are protectant fungicides with low phytotoxicity and short withholding periods. Because of the short withholding period they have been widely used close to harvest. There is cross-resistance amongst all the active ingredients within the dicarboximide group.

Resistance of Botrytis cinerea in grapes, berryfruit and glasshouse crops and resistance of Monilinia fructicola in stonefruit to dicarboximide fungicides first appeared in the early 1980s in many countries, including New Zealand. There is a loss of disease control associated with resistance in both these fungi. There is also evidence for a loss of fitness associated with resistance, resulting in a decrease in the frequency of resistant strains when dicarboximides are no longer used. This makes ongoing use of dicarboximides for control of B. cinerea and M. fructicola possible. Some evidence, especially for M. fructicola, suggests that the fitness penalty for resistance strains is becoming less with time. In both B. cinerea and M. fructicola, strains occur with dual resistance to dicarboximides and benzimidazoles.

There are unconfirmed reports of reduced efficacy against some turf diseases, but there is no experimental evidence to suggest that resistance is involved. Loss of efficacy when dicarboximide is applied to soil to control Sclerotium cepivorum is caused by enhanced microbial degradation of the fungicide, not resistance.

Observe manufacturers' recommendations for application rate and timing for specific products and the maximum numbers of applications of dicarboximide products for specific crops (Table 3). Exceeding the maximum number of applications per season will increase the risk of resistance development. Use dicarboximides only when conditions favour disease, but when disease incidence is low. Do not use where disease has become well established. Testing of pathogens for dicarboximide resistance is carried out commercially by some laboratories, and is recommended as part of the resistance management strategy.

Product labels should include a statement about resistance risk and a recommendation about the maximum numbers of dicarboximide fungicides that should be applied.

This resistance management strategy has been compiled with assistance from Jack Richardson (Agcarm Inc.) and Max Moore (Bayer CropScience).