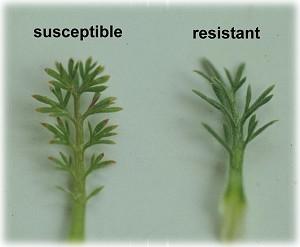 Clopyralid (sold under such trade names as Versatill, Archer, Multiple and Tango) has been used routinely in many turf situations to control Onehunga weed (Soliva sessilis). Biotypes of Onehunga weed have now been identified initially in Northland and now other parts of New Zealand that have developed a resistance to clopyralid (Harrington et al. 2001). Clopyralid is a pyridine herbicide (also known as a picolinic herbicide, with O3 mode of action) and there is also cross-resistance to the other pyridine herbicides on the market, namely picloram and triclopyr. Thus Victory Gold, which contains both of these active ingredients and is registered for use in turf, will not control this resistant biotype either.

Phenoxy herbicides such as MCPA and 2,4-D have never given very good control of Onehunga weed. However, herbicides from other families still give good control. Bentazone (sold in products such as Basagran, Troy, Broadstar and Dictate) will control both resistant and susceptible biotypes if applied before plants become too mature. Mixtures of mecoprop, ioxynil and bromoxynil (Image) have also controlled the resistant biotype. It is assumed that a mixture of MCPA + mecoprop + dicamba would also work. This is a common turf herbicide sold under trade names such as Turfclean, Trimec, Hat-Trick and Legend but no trials have been conducted with this mixture.

The management of this problem is helped by the resistant biotype having leaves slightly different in shape to those of the normal susceptible biotype (Harrington 2004). The leaflets tend to be narrower and less branched. If after spraying Onehunga weed with a herbicide such as clopyralid or Victory Gold some plants fail to die, look to see if they have this different appearance. If so, try to ensure they are not permitted to set seed by killing survivors with another herbicide type.

The build-up of resistance in the population will be avoided or greatly reduced by not relying every year on use of pyridine herbicides for weed control. Alternate with products such as Image or a MCPA/mecoprop/dicamba mixture.

The assistance of colleagues in reviewing this strategy is gratefully acknowledged, especially Trevor Patterson.