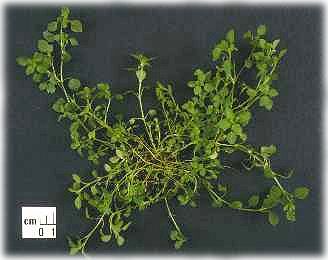 Sulfonylurea herbicides such as chlorsulfuron are Group B herbicides used extensively in cereal crops throughout the world, but unfortunately resistance to these herbicides can develop quite quickly within weed species (Rahman et al. 2001). In the early 1990s in Southland, populations of chickweed (Stellaria media) were found that had developed resistance to chlorsulfuron (which is sold in products such as Glean, Basis, Centric and Tackle) after 10-12 years of using this herbicide annually on cereal crops (Bourdôt 1996). This resistance has since developed in chickweed in other parts of New Zealand such as Canterbury. A strategy for managing this problem has previously been published for New Zealand conditions (Harrington 2005) and is summarised below.

Grass weeds can also become resistant to these herbicides. Perennial ryegrass populations have been found in Canterbury wheat crops that are resistant to a number of sulfonylurea herbicides such as chlorsulfuron, iodosulfuron (Hussar, and in Othello OD) and pyroxsulam (Simplicity, Rexade GoDri) (Gunnarsson et al. 2017). Although iodosulfuron and pyroxsulam are relatively new herbicides in New Zealand, the use of older sulfonylurea herbicides such as chlorsulfuron and tribenuron for many years are thought to have helped apply selection pressure to ryegrass populations despite not being as effective on ryegrass as the newer products.

But it is not just for the Group B herbicides where resistance problems are beginning to appear in New Zealand cereal crops. A few wild oats populations from Canterbury have developed resistance to the Group A herbicides fenoxaprop-P-ethyl (Puma S, Foxtrot, Coronet, Panther S) and haloxyfop (eg Gallant Ultra, Valiant 520, Crest 520, Ignite) (Harrington & Chynoweth 2014). Although haloxyfop is not registered for use in cereal crops, it is used in broad-leaved crops rotated with cereals to deal with wild oats infestations. Likewise, Italian ryegrass populations have been found to have developed resistance to haloxyfop and partially to another Group A herbicide, pinoxaden (Twinax), used selectively in cereals (Gunnarsson et al. 2017).

When trying to avoid resistance occurring to these herbicides, or to manage resistance when it develops, care needs to be taken to either use herbicide mixtures that contain chemicals with other mechanisms of action than just Group B or Group A, or to rotate from season to season with other chemical groups. Generally mutations that cause resistance to one chemical from a group of herbicides will often give cross-resistance to others in the group (Seefedlt et al. 2001). It may be easier to achieve herbicide rotation by having crop rotation, which allows a wider range of other chemicals to be used.

Rotation to other chemical groups is not straight forward though, as illustrated by chlorsulfuron-resistant chickweed. Chickweed has always been poorly controlled by some of the alternative herbicides available, such as bromoxynil (Group C3), or MCPA and 2,4-D (Group O1 herbicides). One herbicide that would be suitable is mecoprop (also a Group O1 herbicide), and this is available in several formulations (eg Trimec, Duplosan KV, Hat-Trick, Legend, Image, Duplosan Super, Saxon). Other possibilities include bentazone (a Group C3 photosynthesis inhibitor sold in products such as Basagran, Broadstar, Troy, Pulsar), diflufenican (a Group F nicotinanilide herbicide sold in products such as Jaguar, Firebird, Quantum and Othello) and isoproturon (a Group C2 substituted urea sold in Twister and IPU 500) (Seefeldt et al. 2001). Even if resistant chickweed is not yet present, it would be sensible to use some of these herbicide in alternate years instead of only Group B herbicides every year.

For control of grass weeds in cereal crops, rotating with chemistries other than Group A and Group B herbicides is more difficult. Of the herbicides mentioned above, isoproturon can control ryegrasses and it suppresses wild oats. Another grass-killing herbicide that can be used in cereal crops that is not from Group A or B is flamprop-M -isopropyl (a Group Z herbicide sold as Stratos and Crusader), but this is ineffective on ryegrasses, and must be applied at an early stage within a competitive crop to give good control of wild oats. Triallate (Group N, sold as Avadex Xtra) can be used at pre-emergence in wheat and barley for wild oats control. Trifluralin can be used in barley crops.

The other main option to spray grass weeds with herbicides that are not from Group A or B is to rotate with crops that are not cereals so that a wider range of herbicides can be used. For example, trifluralin (Group K1) applied and incorporated using cultivation can give useful control of wild oats and ryegrasses in crops such as peas and brassica crops. Terbuthylazine (Group C1) can be used in peas, sweet corn and maize.

Rotating with pasture will result in no grass herbicides being applied, and a period of time in pasture may help with wild oats if plants that establish get eaten. But ryegrass plants will probably survive, and time spent in pasture will probably just delay the onset of resistance rather than prevent it.

Another possible strategy is to scout through crops that have been treated with Group A or B herbicides, and if patches of surviving plants are present which cannot really be explained by being missed by the sprayer, these can be spot-sprayed with a herbicide from another group of herbicides. There could be some advantage in getting a few of these surviving plants tested for resistance as well before killing the remainder.

Another strategy is to ensure that crops establish rapidly and grow competitively to help control weeds that may be developing resistance simply through being out-competed.

It also pays to keep good records of what herbicides have been applied in each paddock on the farm each year to ensure that sensible rotation of herbicides is occurring.

The assistance of colleagues in initially devising this strategy in 1994 is gratefully acknowledged, especially Graeme Bourdôt, Anis Rahman, Trevor Patterson, Roger Field, Mike Cornwell, Bob Moffatt and Murray Willocks. Thanks also to Richard Chynoweth who assisted with the recent update.