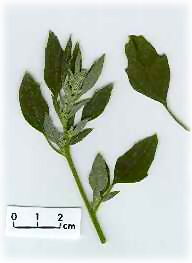 Some NZ populations of fathen
Chenopodium album are resistant
to triazine herbicides.

Most maize crops in New Zealand that are harvested for grain are grown as a non-rotational monoculture. The ground is usually left fallow between maize crops and on some cropping farms maize has been grown continuously for well over 40 years. This is a classic scenario for development of herbicide resistance. The best way to avoid herbicide resistance in continuous monoculture is to rotate the herbicides used for weed control ensuring that herbicides with differing modes of action (see Table 1 below) are routinely used in successive crops.

However, in the early years of maize cropping there were less herbicides to rely on and atrazine was regularly used every year for control of broadleaf weeds. Thus it was hardly surprising that the first case of herbicide resistance in New Zealand was discovered in maize paddocks. The weed fathen (Chenopodium album) developed resistance to atrazine in the early 1980s and is now widespread on cropping farms. In the 1990s both willow weed (Persicaria persicaria formally Polygonum persicaria) and black nightshade (Solanum nigrum) also developed resistance to atrazine although these biotypes are fortunately not so widespread (Rahman & Patterson 1987; Harrington et al. 2001).

When fathen developed resistance to atrazine, alternative herbicides were immediately found to control it. However, some of the alternative herbicides were relatively expensive and/or had narrow weed spectrums. With dicamba, maize growers found a herbicide that was not only cheap but also controlled a wider range of difficult to control weeds, such as Californian thistle (Cirsium arvense) and pink bindweed (Calystegia sepium). Unfortunately, because of this practice dicamba has been used repeatedly, and dicamba resistance has also developed within fathen in some areas of Waikato (James et al. 2005). Thus there is now a biotype of fathen that is resistant to atrazine only and another biotype that is resistant to both atrazine and dicamba.

Further cases of herbicide resistance are starting to appear in places. For example, summer grass now appears to be developing resistance to nicosulfuron on a few farms growing maize.

Strategies for dealing with herbicide-resistant fathen and willow weed in maize crops have been published in the past (Harrington & James 2005) and are updated here. One way to overcome these problems is to not grow maize in the same paddock for too many years in succession, but rather, to rotate maize with other types of crops or pasture. This will at least slow the rate at which resistant weeds will build up.

A more practical strategy for some farmers involves the choice of herbicides. By applying a combination of two or even three herbicides, each with different modes of action, weed plants resistant to one of the herbicides will be controlled by another herbicide and so be unable to set seed and multiply within a paddock. When rotating herbicides, it is important to understand that some herbicides are very similar in their chemical structure and action (Table 1). Rotating between herbicides within the same chemical group serves no useful purpose because a weed that is resistant to one member of a group will usually be resistant to all other members of that group.

Weed control in maize crops normally includes the use of triazine herbicides. These control many broadleaf and some grass weeds, but they are weak on many grasses, such as smooth witchgrass (Panicum dichotomiflorum) and barnyard grass (Echinochloa crus-galli). Therefore a second herbicide is usually also applied. Herbicides that control most grasses and so are suitable to add with a triazine include the chloroacetamides and pendimethalin. More recently a range of herbicides has become available that can be applied post-emergence. Some are specific and control only broadleaf weeds while others control both grass and broadleaf weeds. These are also good tools for managing herbicide resistance.

One of these herbicides is nicosulfuron, belonging to a chemical family (ALS inhibitors) that has shown great predisposition to herbicide resistance. In fact more weeds have developed resistance to this herbicide group, and in a shorter time, than to any other herbicide group (Heap 2020). Therefore, when controlling fathen (either atrazine-resistant, dicamba-resistant or non-resistant) repeated use of any one herbicide must be avoided and longer term rotations should be employed. Some resistance to nicosulfuron has been found to have developed in summer grass, so rotating use of nicosulfuron with pre-emergence applications of acetochlor, or post-emergence applications of topramezone, would help with managing this risk.  Another option, rather than using rotation, is to apply mixtures, such as nicosulfuron with mesotrione at post-emergence.

Although not widely used for weed control in maize, metribuzin and linuron are registered for this purpose but note that metribuzin is closely related in structure to the triazines, so alternating between triazines and metribuzin would probably not prevent resistance from building up. Some atrazine-resistant fathen biotypes overseas are also resistant to metribuzin.

When a new case of herbicide resistance appears in a maize paddock, such as summer grass resistant to nicosulfuron, there is also a range of cultural strategies that should be considered to prevent spread of the resistant weeds. In particular, harvesting machinery and cultivators should be cleaned after working in a paddock where new cases of resistance have appeared, to reduce the chances of resistant weed seeds being transported to other paddocks and farms free of resistance. The weed species should also be controlled around the fence-lines and field boundaries using a combination of knockdown and residual herbicides, or growing a suppressive species such clover in the case of summer grass then controlling grass weeds with a selective herbicide.