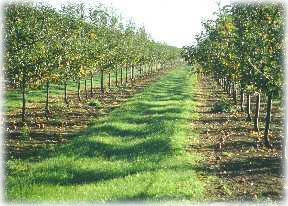 For many years, triazines such as simazine were applied every year within horticultural crops such as apples, peaches, grapes and kiwifruit (Harrington et al. 1992).  We are fairly certain that resistance developed in at least black nightshade (Solanum nigrum) and possibly other species as a result of this over-use of triazines and lack of rotation with other herbicides (Harrington et al. 2001).  Thus a brief strategy for avoiding triazine resistance in orchards was developed in 1996 then updated in 2004 (Harrington 2005) and several times since then.

During that time, there was a dramatic decrease in the use of triazine herbicides as pipfruit growers, kiwifruit growers and grape growers were all asked to greatly reduce their use of residual herbicides by their respective producer boards.  However not all growers and crops were affected by this, so this strategy below was aimed at those horticultural crops in which simazine and terbuthylazine were still being routinely used each year.  In recent years with the development of glyphosate resistance in vineyards, slowly there has been acceptance that residual herbicides should be used again to allow herbicides with extra modes of action back into the orchards and vineyards as tools to combat glyphosate resistance.  So this strategy is now more important again to ensure resistance doesn't occur to residual herbicides.

Orchardists who have been using simazine or terbuthylazine for many years should consider alternating every second or third season with residual herbicides from other chemical groups to reduce the chance of resistance developing. In many orchards the build-up of species which were never susceptible to simazine has also been a problem (Harrington et al. 1992). Rotation with alternative chemical groups, or judicious selection of herbicide combinations, would help overcome this problem.

Residual herbicides registered for use in New Zealand perennial fruit crops are listed in Table 1 below.

Triazines give poor control of some grass weeds, and also certain broad-leaved species. This is now less of an issue with the release of indaziflam, which has a wider range of weeds controlled. Likewise, flumioxazin also now controls a wide range of weeds. If not using either of these, triazine herbicides should either be alternated with, or used in combination with, herbicides from the remaining groups listed in the table that do control these problem species.  The use of alternation or combination of herbicides will also help stop resistance building up within a species such as within black nightshade.  Selecting the most appropriate herbicides is best done by using the “New Zealand Novachem Agrichemical Manual” (AgriMedia 2020) to select products that will control species that have caused problems within a crop in past seasons.  It is important with the recent introduction of indaziflam and flumioxazin that neither of these are now over-used year after year to risk resistance developing to these.

Apart from use of residual herbicides, much of the alternation of herbicides within perennial fruit crops takes the form of knockdown herbicides to remove species not controlled by residual herbicides applied early in the season, and this works well too.  In fact, most of these residual herbicides give poor control of existing weeds, so these weeds need to be removed at the time of applying residual herbicides.  The main herbicide used for this is glyphosate (Group G), but there is also some use of amitrole (Group F3) either early in the season or after harvest, and also glufosinate (Group H), especially during summer.  Paraquat (Group D) is another option in those fruit crops where use of this herbicide is permitted.  Grass weeds can be controlled using Group A herbicides such as fluazifop and clethodim (though check whether herbicides are registered for a particular crop before using them).  A major point to consider though is not to rely too heavily on just one of these chemicals, especially glyphosate, as herbicide resistance has now begun developing due to overuse of this herbicide within fruit crops.