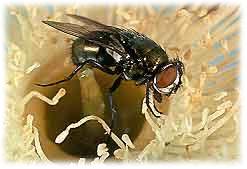 Both the Australian sheep blowfly, Lucilia cuprina, and its European counterpart, L. sericata, are resistant to some insecticide groups used in the prevention of flystrike in New Zealand sheep (Wilson 1999). Management strategies aimed at reducing reliance on insecticides will not only conserve the efficacy of existing products, but will help reduce residues in wool to levels that are acceptable to overseas markets.

Flystrike (ovine myiasis) is a disease of livestock caused in New Zealand by four species of blowflies (Calliphoridae), either individually or in concert (Heath & Bishop 1995). Both L. cuprina and L. sericata are responsible for initiating the majority of flystrikes, but the primary lesion is often colonised a little later by either Calliphora stygia, the brown blowfly, or Chrysomya rufifacies, the hairy maggot fly. Both of these latter species alone can also initiate flystrike. Sheep affected with flystrike can suffer a variety of symptoms ranging from weight loss to death. Survivors lose wool and pelt quality as well (Heath 1994).

The principal means of preventing flystrike has always been dipping, which saturates the entire sheep's fleece, or body regions most prone to flystrike, in an insecticidal formulation that persists for long enough to provide the farmer with a worry-free period during times of high blowfly activity.

Because dipping sheep is not a straightforward or cheap procedure, farmers often use insecticides that combine flystrike prevention with louse control in one operation. This means that selection pressure for resistance can operate on both parasites simultaneously (Sales et al. 1996), which is not a desirable outcome.

Diazinon-resistant populations of L. cuprina and L. sericata occur throughout New Zealand (Wilson 1999) and have weak side resistance to other organophosphates. The result is that protection periods afforded against flystrike are substantially shorter (ca 75% less) than might otherwise be expected (Levot & Boreham 1995). There is also a degree of resistance to the benzoyl urea diflubenzuron in some populations of L. cuprina that seems to be directly correlated with diazinon resistance (Haack et al. 1999). There have been no reports of altered susceptibility to other chemical groups currently in use as flystrike preventives.

There is no recorded resistance to triazines, pyrimidine carbonitriles or macrocyclic lactones among blowflies in New Zealand or overseas. These materials can be used in regions where diazinon and diflubenzuron resistance makes flystrike prevention difficult. Alternatively, although there is side resistance to organophosphates other than diazinon, it is not strong, and satisfactory flystrike protection periods can still be achieved using these chemicals.

For farmers wanting to reduce reliance on synthetic insecticides, a range of non-chemical methods available that, if used in an integrated fashion, can reduce flystrike prevalence (Cole & Heath 1999; Edwards et al. 2001). Blowfly trapping and behavioural disruption (Heath & Leathwick 2001), along with parasitoids (Bishop et al. 1996) and specialist forage crops that reduce breech soiling (Leathwick & Heath 2001) can, when used in conjunction with husbandry and grazing management provide flystrike protection, largely independent of chemical use.

Products with label claims for prevention of flystrike in New Zealand

1For flystrike prevention only, no biting-louse claim.

The following guidelines are recommended:

Cole DJW, Heath ACG 1999. Progress towards development and adoption of integrated management systems against flystrike and lice in sheep. Proceedings of the New Zealand Grassland Association 61: 37-42.