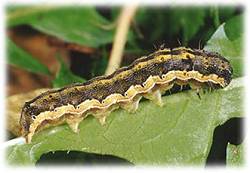 Helicoverpa armigera (tomato fruitworm) is capable of becoming resistant to insecticides. Management strategies aimed at preventing or minimising resistance will help maintain control and conserve the effectiveness of existing products. This is an update of the earlier resistance management strategy (Cameron 1996).

Tomato fruitworm, also called corn ear worm, is a pest of vegetable and flower crops. Caterpillars damage flower, fruit and leaves. Insecticides are used to control H. armigera on processing vegetable crops, such as tomatoes, sweet corn, beans and lettuce, as well as greenhouse crops and ornamentals. Populations in peas, squash, lucerne, pines and a wide variety of plants in waste areas, such as clovers, Lotus, chicory and mallow, are usually not directly treated. Helicoverpa armigera has a low damage threshold because it attacks flowers and fruit. Control on processing crops, particularly tomatoes, relied mainly on the use of synthetic pyrethroids (SPs) until the mid 1990s when fears of resistance led to the development of IPM strategies.

Overseas, resistance to synthetic pyrethroids has been of particular concern and control failures in Australia have led to the development of a strategy to limit resistance in crops in which H. armigera is a key pest (Forrester 1990). Resistance to SPs also occurs in Thailand and India, and Heliothis virescens has become resistant in the USA. Helicoverpa armigera has a history of resistance to DDT and has also developed resistance to endosulfan (Forrester et al. 1993), carbamates and organophosphates (Gunning et al. 1992).

The original genus Heliothis has now been split into Heliothis and Helicoverpa. Helicoverpa armigera is the only species resident in New Zealand. This species occurs on a wide range of crop, ornamental and weed plants. It is commonly known as tomato fruitworm, but on sweet corn or maize it is known as corn earworm. Helicoverpa punctigera adults are occasional vagrants, but larvae are rarely found. No Heliothis spp. occur in New Zealand.

1and in pine tree nurseries

Control failures resulting from resistance have not been reported in New Zealand. The LD50 for fenvalerate (a standard synthetic pyrethroid) has increased from 1992 to 1995, and although the frequency of individuals surviving normal field concentrations is still low, increases have been recorded (Cameron et al. 1995). Overseas information suggests that control failures may develop with continual selection.

An IPM programme was initiated in processing tomatoes and sweet corn in Gisborne and Hawke's Bay in 1990 (Walker & Cameron 1990). This helped reduce the number of applications of SPs to these crops.

Two larval parasitoids of H. armigera, Cotesia kazak and Microplitis croceipes, were successfully introduced into New Zealand and total parasitism in processing tomato crops on the east coast increased from <1% prior to introductions to between 60 and 80%. However, parasitism rates are low in corn, and management of H. armigera focuses mainly on early harvest or control of the damaging third generation of larvae in corn.

In tomatoes, early season insecticide applications against aphids and thrips were demonstrated to be ineffective or unnecessary for control of virus vectors and insecticide applications in early tomato crops are now not normally required. Reductions in insecticide use and the increasing use of Bt sprays, and more recently spinosad, are associated with increased larval parasitism rates. The action threshold has been raised by growers in response to this increased parasitism (Walker & Cameron, unpubl. data). In late season crops, by monitoring for spray timing and using a floating action threshold, which takes into account levels of parasitism in individual crops, the number of applications has been minimised. Insecticide applications have decreased by 90% since the implementation of the IPM programme (Walker, unpubl. data).

General strategies for managing resistance are based on minimising insecticide applications and alternating the insecticide groups applied to each generation of H. armigera. Because this species is very mobile, the alternation relies on collaboration between industry groups growing crops that may be infested with H. armigera.

Research strategies should include ongoing monitoring of resistance to SP insecticides.

Growers should monitor their crops for H. armigera to ensure insecticides are applied only when necessary.

Synthetic pyrethroids with label claims for use against H. armigera should carry the following label statement:

IMPORTANT - RESISTANCE MANAGEMENT
Resistance to this pesticide may develop from excessive use. To minimise this risk use strictly in accordance with label instructions. For crops infested with H. armigera do not apply before 7 January and avoid unnecessary spraying. Maintain good cultural practices.