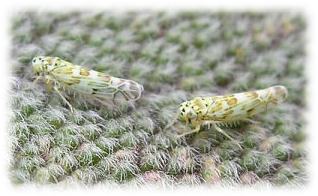 The herb leafhopper Eupteryx melissae is an
immigrant from the Northern Hemisphere
(Photo: R. Husmann, www.insektenbox.de).

Reason for strategy and update

Leafhoppers (Hemiptera: Cicadellidae) are usually secondary pests of export horticultural crops in New Zealand. Populations do not often increase to pest levels, but, when they do, insecticides usually control them effectively. Five species (Table 1) have been recorded as pests, and are widespread through the North and South Islands.

The common names of the first three leafhopper species are those established by the Entomological Society of New Zealand. The common names used below for Z. zealandica and E. melissae describe their usual plant hosts.

Cicadellid leafhoppers feed on mesophyll, usually from the underside of leaves. Edwardsiana froggatti, R. tenerrima and Eupteryx melissae are all unintentional immigrants from the Northern Hemisphere. Zygina dumbletoni may, or may not, be a New Zealand native, and Z. zealandica is found in both New Zealand and Australia.

Edwardsiana froggatti is Froggatt's apple leafhopper, known for a long time in New Zealand as Typhlocyba frogatti. More recently it was called E. crataegi (as in the previous version of this strategy), which is another European species that is currently not recognised from New Zealand. It feeds on pipfruit trees, especially apples, and is the most economically important leafhopper pest in New Zealand. If not controlled, it may reduce photosynthesis and tree vigour, and leave spots of excrement on fruit, which are then rejected from export markets. It occurs throughout Europe and North America and is also found in Australia, Argentina and Chile.

Ribautiana tenerrima is the bramble leafhopper. It may be a minor pest on blackberries, boysenberries and raspberries, although it rarely increases to numbers high enough to physically damage plants. Leafhoppers are recognised vectors of phytoplasma diseases of plants, and R. tenerrima may well transmit phytoplasmas between Rubus plants in New Zealand. Although the causal agent of "Boysenberry Decline" disease was identified as a fungus (Cercosporella rubi) in 1999, phytoplasmas and leafhoppers may retain a role in the disease aetiology and epidemiology (Wood et al. 1999). R. tenerrima also feeds on wild brambles, and so has a huge food-reservoir outside commercially managed berryfruit gardens. It also occurs throughout most of Europe and is also found in Canada and the USA.

Zygina dumbletoni has been recorded predominantly from cane fruit and strawberries.

Eupteryx melissae feeds on assorted herbs, such as rosemary, sage, lemon balm, mint, horehound and catmint. It is a potential pest of any commercial herb-cultivating venture.

In autumn, Froggatt's apple leafhopper females lay eggs under the soft bark of host twigs (usually the current or previous season's growth), or canes of berryfruit plants. Eggs remain dormant until spring, and then develop and hatch over a several week period. Young nymphs feed on the underside of leaves, developing through 5 instars before moulting as winged adult males and females. Mated females usually lay summer eggs in the veins of host plant leaves, where they are protected from pesticide sprays. Summer eggs hatch in mid-summer and the leaf hoppers reach adulthood in autumn. Most species develop through two generations in Auckland, but only one in the South Island. Eggs are often parasitised by Anagrus spp. (Hym: Mymaridae), which emerge after most leafhopper eggs have hatched. Parasitism can be very high.

Products with label claims for control of leafhoppers in New Zealand

Warning: Not all products listed may be suitable for crops being exported to certain markets. Check with your export agency before applying any pesticide on export crops. Observe withholding periods.

Due to the extensive and regular use of insecticides in New Zealand on export crops, the potential exists for leafhoppers to develop resistance. Resistance in Froggatt's apple leafhopper to azinphos-methyl was confirmed for some Hawke's Bay populations in 1994 (Charles et al. 1994).

Resistance has not been recorded in any other New Zealand leafhopper, and should be considered unlikely to occur under existing regimes.

The development of widespread leafhopper resistance to New Zealand would be very costly, and this strategy is designed to reduce selection pressure for resistance as far as possible without jeopardising the quality of fruit.

Egg parasitism by a species of Anagrus is common in leafhopper species throughout New Zealand. The potential to improve the effectiveness of egg parasitism and to introduce new, nymphal parasitoids is being investigated.

The general strategy is to reduce selection pressure for resistance by optimum spray timing, accurate delivery of insecticides and rotation of products with active ingredients from different chemical groups and used in a planned programme. This is combined with management practices for the crop and surrounding host plants that aim to reduce leafhopper numbers. Details are provided below.

This strategy has been written especially for Froggatt's apple leafhopper, but should be applied to other species as a matter of principle.

IMPORTANT – RESISTANCE MANAGEMENT
Resistance to this pesticide could develop from excessive use. To minimise this risk use strictly in accordance with label instructions. Avoid using this pesticide exclusively all season, and avoid unnecessary spraying. Maintain good cultural control practices.

This resistance management strategy should be included:

Wood GA, Andersen MT, Forster RLS, Braithwaite M, Hall HK 1999. History of Boysenberry and Youngberry in New Zealand in relation to their problems with Boysenberry decline, the association of a fungal pathogen, and possibly a phytoplasma, with this disease. New Zealand Journal of Crop and Horticultural Science 27: 281-295.