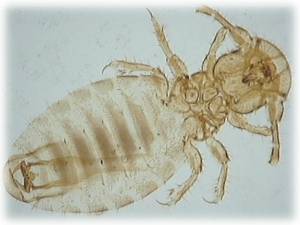 The sheep biting-louse, Bovicola ovis (formerly Damalinia ovis), has developed resistance to the synthetic pyrethroid cypermethrin, and side resistance to other members of that chemical family (Levot et al. 1995; Wilson et al. 1997). Management strategies aimed at reducing reliance on insecticides will not only conserve the efficacy of existing products, but will help reduce residues in wool to levels that are acceptable to overseas markets.

The sheep biting-louse, B. ovis, has been present in New Zealand since the first days of sheep farming and, as a consequence, the louse has been exposed to a wide range of pesticide families. Fortunately there appears to have been no ability on the part of the louse to develop resistance until synthetic pyrethroids were introduced in the late 1970s. Even then there was no sign of reduced efficacy until about the early 1990s (Levot 1992; Wilson et al. 1997). A reduced susceptibility to organophosphates has also been detected in Australia (Levot 1994).

The biting-louse is widespread in New Zealand sheep flocks and can downgrade wool quality (Kettle & Pearce 1974), but more importantly, can reduce lamb pelt quality significantly because of cockle, the manifestation of the sheep's immune response to lice (Heath et al. 1994; Pfeffer et al. 1997). In recent years, insecticide residues in wool have posed a potential trade barrier as European markets try to protect the environment and water quality downstream from wool-scouring plants (Edwards 1998).

Because sheep dipping is not always a straightforward or cheap procedure, farmers often try and facilitate it and improve cost-effectiveness, by using insecticides that combine flystrike prevention with louse control in one operation. This means that selection pressure for resistance can operate on both parasites simultaneously (Sales et al. 1996). This is not a desirable outcome. Unfortunately, only a small number of products with single species label claims exist, so choice is limited. Simultaneous selection can be avoided if dipping to control lice is done outside the blowfly activity period, because lice do not leave the host and are available to insecticides all year round.

1For flystrike prevention only; no biting-louse claim.

Synthetic pyrethroid-resistant louse populations occur throughout New Zealand, especially those resistant to cypermethrin-based formulations, with a strong likelihood of side resistance to other pyrethroids (Wilson et al. 1997). There have been no reports from the field of reduced efficacy with organophosphates, although some evidence from Australia suggests that such may be occurring (Levot 1994). All other chemical groups remain efficacious.

Because all chemical classes, apart from pyrethroids, are fully efficacious, louse control is not difficult to achieve. Nevertheless, in an attempt to reduce the risk of selection pressure, rotation of chemical classes may be advantageous. An important principle, however, is to direct farmers towards dipping to control lice only if the sheep are infested. Many farmers dip on an annual basis as a form of insurance, whether or not their sheep are infested. A simple inspection procedure can determine whether sheep require dipping, but there is also a technology based on the ELISA test which can detect lice based on the presence of louse-specific proteins deposited in wool in louse faeces (Sanderson 2001; A.T. Pfeffer, pers. comm.).

Another good management procedure is to treat sheep immediately off-shears, which ensures a greater proportion of lice come into contact with insecticide, and reduces the volume of dip chemical necessary to achieve this. Wool growth then ensures that the half-life of chemicals is reduced, with consequent reduced selection pressure.

If ewes are dipped during early pregnancy, the risk that they still will be louse-infested at lambing is reduced, as is the chance of lambs becoming infested. Dipping the young lambs results in the flock getting as close to louse-free as possible. The ewe lambs, when old enough to be mated, should not then be in a position to so readily infest their progeny. This could lead to a situation where dipping is only necessary every alternate year, or even at longer intervals, assuming that there is a residual louse population, something that is quite common with the vagaries inherent in dipping.

A good degree of louse control can be achieved by shearing only because solar radiation and dehydration reduce the hatchability of louse eggs. These effects can be enhanced by dipping newly shorn sheep in a water/detergent mix, or with naturally occurring insecticides (Heath et al. 1995), or with conventional products which will provide a better measure of louse control than if they were applied to long-wooled sheep.

The following guidelines are recommended: