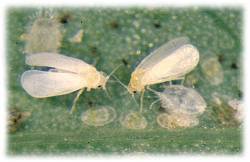 Several species of whitefly (Hemiptera: Aleyrodidae), including two species present in New Zealand, are capable of readily becoming resistant to pesticides. Pest management strategies aimed at reducing or preventing resistance will help conserve existing products for on-going effective use. This is an update of the earlier resistance management strategy (Martin 1996).

The whitefly fauna is summarised in Martin (1999) and economic species are illustrated. Since 1999, an Australian species that attacks citrus has been found in Auckland (Gill 2001). Five species of whitefly are found on crops of economic significance. A sixth species is associated with ferns, but its systematic and economic status is uncertain.

Greenhouse whitefly, Trialeurodes vaporariorum, is the main pest species of greenhouse and outdoor crops. It has a wide host range and some time in the late 1970s a strain adapted to tamarillos and became a major pest of the crop. Normal greenhouse whitefly breed poorly on tamarillos. Both strains are also found on a wide variety of weeds and there are indications that local populations have adapted to some weed species. Reports indicate that in England a strain of whitefly has adapted to chrysanthemums.

Greenhouse whitefly can transmit a disease, beet pseudo yellows virus, to cucurbits, but this has not been confirmed in New Zealand. Control is principally by insecticides although an increasing proportion of greenhouse vegetable growers is using biological control. Unsatisfactory control with pesticides is often due to a poor understanding of the life cycle (Martin 1989), poor between-crop practices and a lack of basic hygiene during plant propagation.

Until recently, most growers relied solely on pesticides to control greenhouse whitefly. Some would spray once a week but most about every two weeks. Few growers applied pesticides in clusters to try and eliminate a generation of the pest. These conditions have been suitable for the development of resistance to pesticides, but there have been no reports of insecticide resistance. Pesticides with label claims for whitefly control in New Zealand all refer to greenhouse whitefly control only.

Two parasites and a fungal pathogen of greenhouse whitefly are present in New Zealand. One parasite, Encarsia formosa, is available for sale to growers. It will also parasitise cabbage whitefly and silver leaf whitefly. A second parasite, E. pergandiella, has a complex life cycle. It will parasitise greenhouse whitefly to produce females, but in order to produce males it parasitises whitefly previously parasitised by itself or E. formosa. High numbers of E. pergandiella can be found outdoors in late summer and autumn. The fungal pathogen, Verticillium lecanii, is present in New Zealand and is used overseas to control whitefly and aphids.

The consequences of resistance to pesticides by greenhouse whitefly are very significant to growers of particular crops and may make growing some crops impossible or economically very difficult. This would include crops where whitefly is, at this stage, a minor pest. This strategy is designed to reduce selection pressure for resistance as far as possible without jeopardising produce quality.

Sweet potato whitefly, Bemisia tabaci, adults look similar to greenhouse whitefly, but at rest hold their wings parallel to their body (Martin 1999). The larvae can be readily distinguished under a microscope. When B. tabaci was first found in New Zealand it was thought to be sweet potato whitefly, B. tabaci (poinsettia strain or strain B), however, this is not certain. B. tabaci strain B is now also called B. argentifolii. This species or strain has a wider host range (including tomatoes and vegetable brassicas), causes physiological disorders in plants and transmits viruses and has a high tendency to express resistance to pesticides. Most overseas literature does not clearly define the species or strain of Bemisia so that it is difficult to relate published information to the strain present in New Zealand.

In New Zealand, sweet potato whitefly has only been found on ornamental plants, principally poinsettia and begonia, and appears to be established only at two nurseries, one in South Auckland and one in Christchurch. No virus diseases associated with the whitefly have been found in New Zealand. Only a few pesticides are known to give effective control in New Zealand. Overseas, Encarsia formosa can control Bemisia in some ornamental greenhouse crops.

Cabbage whitefly, Aleyrodes proletella, is distinguished by the black mark on its wing (Martin 1999). It is mainly found on brassicas and Sonchus and rarely needs to be controlled.

Ash whitefly, Siphoninus phillyreae, was found in Auckland in May 1995. It is widespread in the Auckland region and is spreading to other parts of New Zealand. Hosts include pipfruit and many deciduous trees including ash. A host specific parasitoid, Encarsia inaron, which is self-introduced to New Zealand, usually controls the whitefly to very low numbers.

Citrus whitefly, Orchamoplatus citri, an Australian species, was discovered in Henderson, Auckland in October 2000 and was also present in Auckland, North Shore and Waitakere cities and Kumeu. It is now present in Nelson (R. Henderson, pers. comm.). It can infest all varieties of citrus (Gill 2001) and can breed on the native trees, titoki (Alectryon excelsus Gaertner (Sapindaceae)) and juvenile leaves of pohutukawa (Metrosideros excelsa Gaertner (Myrtaceae)) (R. Henderson & N.A. Martin, unpubl. data). It is a minor pest causing leaf distortion and is associated with honey dew and sooty mould.

Other whitefly found on commercial plants include Aleuroclava eucalypti on Eucalyptus and Pealius azaleae on Rhododendron species.

Products with label claims for whitefly control in New Zealand

The pesticides for whitefly control can be grouped into 6 categories as shown in Table 1. In addition, a biological control product is available to growers.

Additives such as oils and spreaders and stickers should only be used if the pesticide product label recommends the use of a spreader/sticker.

There have been reports of insecticide resistance to greenhouse whitefly, but only the most recent, to buprofezin, has been confirmed (Workman & Martin 1995).

Whitefly have two life stages that are resistant to pesticides. For this reason a single application of pesticides is rarely very effective. A brief understanding of the whitefly life cycle will help improve control of the pest.

The winged adults (male and females) are mainly found on the youngest leaves. The females lay eggs on young leaves upon which they are feeding. All subsequent stages stay on the leaf upon which the egg was laid. As a result the older whitefly stages are found on the older plant leaves. There are four larval stages that appear like flat oval scale insects. The first larva has legs and crawls a short distance from the egg. The last larval stage swells up and when fully grown, stops feeding and forms a pupa within the nymphal skin. This is called a puparium. Some growers call this stage an "egg" because the adult hatches from it. See Martin (1999) for more information and pictures of the life cycle stages.

Guidelines to reduce the risk of whitefly resistance include the following points.

To keep whitefly numbers very low or undetectable during propagation and after planting out:

Follow these guidelines to keep whitefly numbers very low or undetectable during propagation and after planting out.

The only perennial outdoor crop with persistent whitefly problems is tamarillo. At this stage it is not known how serious ash whitefly will be. See above for protection of new plants grown from seed or cuttings. The following guidelines will help to control whitefly between growing seasons.

Crop-specific IPM manuals that include pesticide resistance management/prevention strategies for whitefly and other insects, mites and diseases, are available for greenhouse beans, capsicums, cucumbers, roses and tomatoes.

The strategies for greenhouse crops are divided into those crops where chemical residues on the crop are of concern (fruit and vegetables) and other crops. Biological control is practical for most greenhouse fruit and vegetable crops. IPM manuals published by Crop & Food Research (available from Publications Coordinator, Crop & Food Research, Private Bag 4704, Christchurch) that include information on biological control and incorporate non-pesticide methods of pest control suitable for the crop, are available for beans, capsicums, cucumbers and tomatoes. These programmes can be adapted for zucchinis, eggplant, melons and pepinos. If biological control is not practical or appropriate, the following procedures should be incorporated into the crop protection programme.

See Table 2 for list of pesticides registered for each crop.

The only IPM manual for a flower crop for which greenhouse whitefly is a pest is greenhouse roses.

Biological control could be suitable for crops such as Bouvardia produced for the local market. Overseas researchers are testing E. formosa for whitefly control on gerberas.

See also above for greenhouse fruit and vegetables without biological control.

See Table 2 for list of pesticides registered for each crop.

For plants grown from seed or cuttings follow the precautions above. However, if continuous batches of cuttings or seeds are planted it is most useful to organise the propagation and production units to minimise transmission of whitefly from one area to another. It is also important to keep mother plants from which cuttings are taken isolated and whitefly free by non-pesticide means. Also see above for greenhouse fruit and vegetable crops. See Table 2 for list of pesticides registered for each crop.

For transplants grown from seed or cuttings, take all the precautions listed above. See Table 2 for a list of pesticides registered for each crop.

It is important to ensure whitefly numbers are very low during the first half of the growing season when it is still possible to achieve good spray coverage. Monitor plants carefully and spot-spray plants if localised whitefly infestations are found.

1GHWF = greenhouse whitefly where this species is specified or is the only species on the crop, WF = whitefly, GH = greenhouses, TSP = transplants, XX = no label claim for whitefly, but claim for control of other insects in citrus.

Georghiou GP 1981. The occurrence of resistance to pesticides in arthropods, an index of cases reported through 1980. FAO of UN, Rome. 172 pp.